Facebook’s plans to go public are a headline grabber, but in terms of fundamental global economic impact, the proposed US$90 billion merger between two Zug, Switzerland-based firms—mining giant Xstrata and premier global commodity trader Glencore—deserves much closer attention. People can live well without a Facebook account, but life gets a lot harder if prices for the copper that brings power to their computer suddenly climb when a large miner/trader acquires the potential capacity to squeeze the market.
Combining and integrating the two firms’ global network of mines, smelters, warehouses, transportation assets, and savvy traders creates a range of opportunities for the new company to use its market intelligence and sheer size to extract premium prices from consumers of the vital raw materials it produces. Chinese commodity buyers could face a company with great influence in the copper, lead, zinc, nickel, cobalt, and seaborne coal markets. The combined Xstrata/Glencore entity would control an estimated 7.5% of global copper production, 8.8% of seaborne thermal coal supplies, 10.2% of global zinc production, and 10.5% of global seaborne coking coal supplies (Exhibit 1). 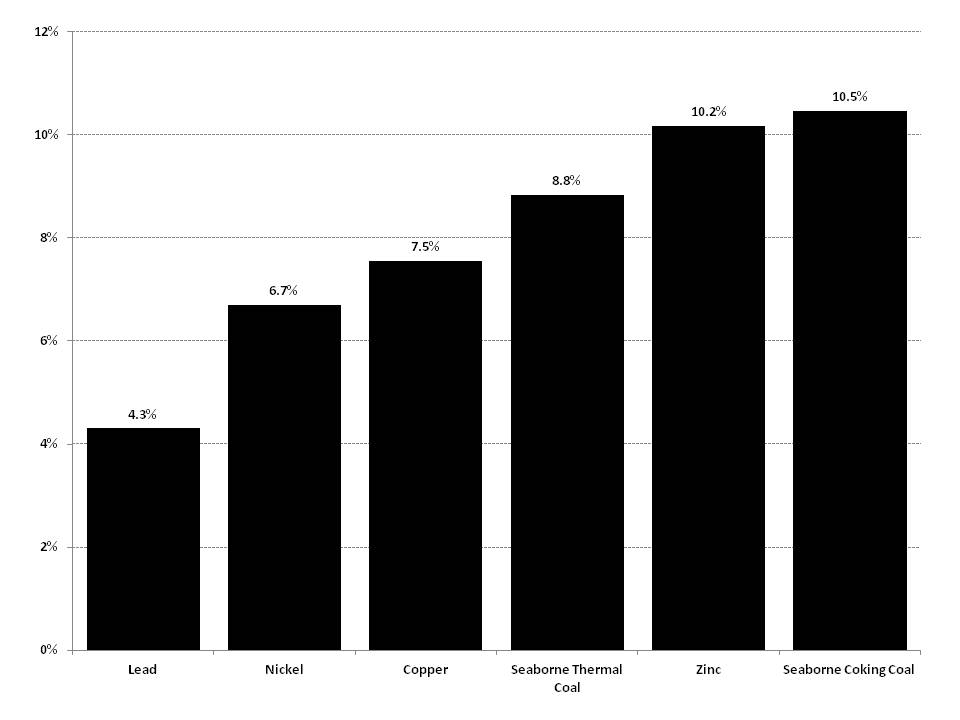 To give a sense for the degree of market leverage the new company would have, Saudi Aramco, the world’s most important oil producer, pumps roughly 9.5% of the global crude oil supply. And nobody would understate Aramco’s importance to global oil markets.

The deal would also promote a broader consolidation of supply in key commodity markets (Exhibit 2). After the merger, the five largest suppliers will control nearly 30% of seaborne thermal coal supply, 1/3 of the global copper supply, nearly 40% of the zinc supply, 55% of the nickel supply, and 69% of the seaborne coking coal supplies needed so badly by Asian steel mills, including Chinese steelmakers who imported 48 million tonnes of coking coal in 2010. Fewer producers controlling a greater portion of the supply of key commodities is not happy news for Chinese importers. Many will recall the bitter fights in past years over pricing between China and its seaborne iron ore suppliers Rio Tinto, BHP Billiton, and Vale. The three companies supply the overwhelming majority of China’s imported iron ore. Chinese buyers have also at time had tense price talks with global potash suppliers such as Canpotex and Belarusalkali, which along with a handful of others, supply the bulk of China’s potash supply. PotashCorp says that China will import roughly 75% of its potash supply over the long-term.

While Xstrata/Glencore still does not quite attain the market concentration of a company like Vale, which by itself supplies a quarter of the global seaborne iron ore trade, it arguably has a bigger advantage in negotiations due to the comprehensive market knowledge it gains by virtue of its position astride all aspects of the global physical commodity production and trading chain. The last thing purchasing managers at copper wire makers, galvanizing plants, and steel mills want is to face sellers who not only control a greater proportion of supply than before, but probably also understand local and global market conditions in real time better than they do.

Xstrata was a major base metals supplier before the merger, but the proposed new company stands to be the largest global supplier of lead, zinc, and seaborne thermal coal (Exhibit 3). The construction materials, steel, coal, and power sectors are particularly exposed to the higher pricing power that a supplier like the new company would have. Xstrata/Glencore would be the world’s second-largest seaborne coking coal supplier and second-largest copper supplier, trailing only Chile’s state-owned Codelco.

Exhibit 3: Xstrata and Glencore—Global Market Rank Before and After the Merger

China’s thermal and coking coal import dependency continue to rise as the costs of domestic production increases due to wage inflation, lower quality reserves, and higher transportation costs as coal comes from areas further from the coast and must traverse bottlenecked rail and road networks. In the power sector, State Grid of China plans to invest roughly US$49 billion in the country’s power network in 2012. Power grid investment has slowed a bit from prior years (there will be a roughly 6% year-on-year increase in 2012), but nonetheless represents a significant copper demand driver.

The new company would also be one of the world’s largest cobalt suppliers, able to supply at least 20,000 tonnes per year, or roughly a quarter of the market. As China’s superalloy production and civilian and military aerospace industries grow, cobalt is a strategic metal of concern and we suspect that Aviation Industry of China (AVIC)’s procurement staff are likely to watch the proposed Xstrata/Glencore merger very closely.

–The merger would be a net negative for Chinese commodity buyers and the Chinese economy because market consolidation reduces opportunities to acquire resources at a lower price.

–The growing power of foreign firms over vital commodities that China needs is also likely to spur Beijing to hasten the creation of China’s own global integrated commodity production, marketing, and trading giants. China already has a number of trading companies such as oil trader Unipec that are world-class in terms of volumes traded and which could serve as the basis for building China’s own commodity trading empire.

–An Xstrata/Glencore merger could also trigger a wave of consolidation among larger mining firms that concentrates the market and turns acquisitive companies’ attention to frontier mining areas like Mongolia and Greenland.

–Alternatively, Chinese firms like China Minmetals could also consider mining partnerships in third countries with Xstrata/Glencore that combine the company’s expertise with the Chinese firm’s access to capital at preferential rates.

–The combined company’s financial heft could help it acquire other resource producers, potentially  increasing its market power in commodities it trades now such as copper, as well as new ones like iron ore. Chinese commodity buyers should be alert to this possibility.

–A slowdown in China that depresses global commodity prices could actually increase the country’s dependence on Xstrata/Glencore because the company tends to have substantially lower production costs than many domestic miners in China, which would likely be forced to curtail operations if metals prices declined.

–In addition, Chinese smelters and miners face wage inflation, rising electricity prices, and environmental pressures. This tough trio is likely to further reduce their cost competitiveness in the face of Xstrata/Glencore’s imports.

[1] Based on production data from 2010 to maintain consistency across data sources.